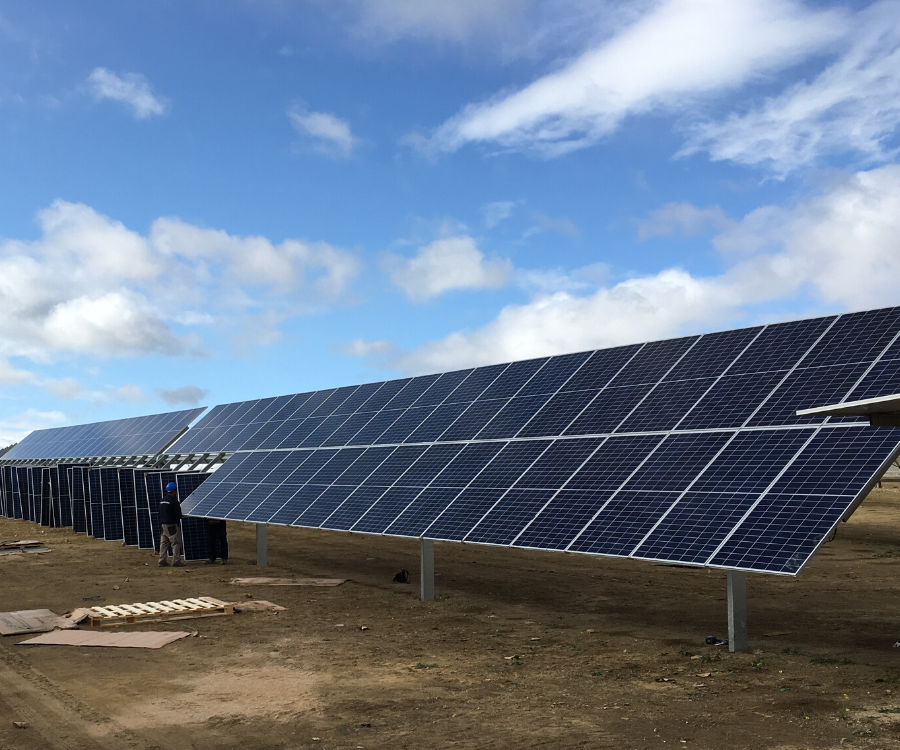 In September a team from Elgin Energy visited two solar farms under construction in Spain to see first-hand the technology, particularly tracking systems, being installed on site.

The first solar farm visited by our team was the Escatron Solar Farm. The project is currently being installed in Escatron near Zaragoza in North Eastern Spain. Just over three hours west of Barcelona, Zaragoza is the capital of the region Aragón and the fifth largest city in Spain. The project is 186MWp in size and is scheduled to be energised at the end of this year. Installation has taken place from February – October 2019. On average 200 people were working on site, peaking at 500 people at one point. Commissioning will take place over the final two months of this year.

The owner and investor of the project is Cobra Group, a unit of Spanish industrial group ACS. The company develops, creates and operates industrial infrastructure. The Engineering, Procurement and Construction (EPC) team responsible for installing the project is Elmya. The technology used on site is GCL 335-345w 72 cell poly monofacial modules, FreeSun 3.6MW Central inverters and Mecasolar single axis trackers.

Escatron solar farm will avail of a government subsidy awarded in auctions held in July 2017 conditional to energisation at the end of this year. If the project is not energised on time it will be fully merchant. A total of 3.5GW of solar PV was selected in the auction held by the Spanish Ministry of Energy, Tourism and the Digital Agenda. Cobra took the largest share with 1.55GW of solar.

The second solar farm visited by our team is Arasur Solar Farm. The project is 24MWp in size. The government owned LKS is the EPC and owner of this project. During installation there were 28 men on site, peaking at 36.

The technology used on site is Canadian solar modules alongside both central and string inverters. In recent years, some projects have favoured string inverters as they allow for increased control during O&M when compared to central inverters.

Configuration on site was two modules in portrait to each frame, measuring 4m at the highest point in full range. When combined with the tracking system, this size can lead to increased risk of wind load and may require additional steel to anchor the system, particularly for the outer rows of the site. 45 modules were installed to each tracking system and the entire tracking system was assembled in three and a half months. Tracking systems were provided by Nclave.

Our team also visited Nclave’s factory, located nearby Arasur solar farm. The factory produces both tracking and fixed tilt systems. Nclave are concentrating on single axis tracking systems in line with market demand. Both single row and multi row single axis trackers were being produced. Single row is one row of panels being rotated and powered by one motor. Multi row is one motor powering the rotation of multiple rows at once.

You can learn more about the Spanish solar industry and the unsubsidised projects that are being installed here.