Elgin Energy entered the Australian market in January 2019 and have established headquarters in Sydney. Operations will be headed up by Tim Averill, General Manager – Australia.  Initial development is concentrating in the South East of the country.

Tim joined Elgin Energy in 2018. He has worked in the renewable sector for more than eight years and has direct experience in biomass, wind and solar across multiple jurisdictions including the UK, Europe, SE Asia, Australia and the US. From 2013 – 2017 Tim worked for SunEdison as European Director of Business Development, assisting the growth of their operations across Europe from the UK. His role focused on development, joint development partnerships and licence acquisitions. During his time with SunEdison, he spearheaded the growth of their UK office from a team of two to an office of forty-five and connected 500MW of solar farms in the UK within four years.

“I am delighted to be the newest member of the development team in Elgin Energy.  The fundamentals in Australia are extremely compelling. It is a market I am already familiar with and I am very excited to undertake the challenges of gaining a foothold for the company here.” – Tim Averill, General Manager – Australia, Elgin Energy

The Australian solar industry has matured over the past decade and has accelerated rapidly in the last three years. High levels of irradiance coupled with high energy costs have created the perfect climate for the solar market to develop. By the end of 2020, the current installed capacity of 9GW is expected to double to 18GW. Commercial ground mount solar and domestic rooftop solar are expected to install 4GW each and 1GW of large rooftop solar is forecasted.

Power prices in Australia have increased significantly in the past four years. The average price in 2016 was $64.42/MWh compared to the average of $87.52/MWh so far in 2019. Renewables are providing major savings compared to these costs. A recent Victorian government auction for 928MW of renewables secured contracts with prices in the mid $50s/MWh for solar.

The Australian PPA market is one of the most progressive in the world. Both merchant and corporate PPAs are on the rise whilst club PPAs are becoming increasingly popular. One of the first solar corporate PPAs was signed in 2017 between Telstra and the 70MW Emerald solar farm in northern Queensland. In mid-2018, rather than opting for a PPA, Sun Metals zinc refinery completed construction of its own 125MW solar farm in Queensland to meet one third of its demand. In July 2018, Australian steel giant BlueScope entered a 7-year PPA to offtake 66% of the energy produced by the 133MW Finley Solar Farm in NSW. And in late 2018, Australia’s largest brewing company, Carlton & United Breweries (CUB) signed a 12-year PPA with the new 112MW Karadoc solar farm in Victoria. 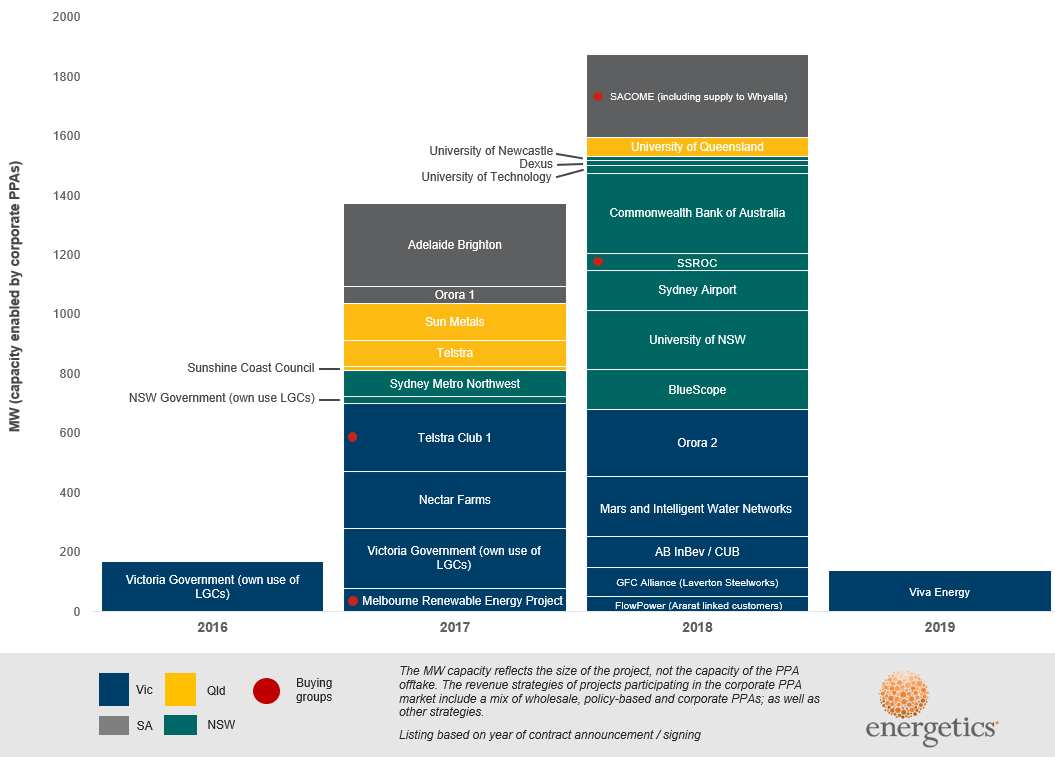 “Australia is home to a very fast paced solar market. For many years now, rooftop solar has been a popular option for Australian homes. In recent years, the record-breaking soaring temperatures have moved renewables to the forefront of the political agenda. Australia is already experiencing the effects of global warming and are trying to rapidly move away from their reliance on fossil fuels. We are very excited to be part of this transition and thrilled to have Tim on board leading our operations. He brings a wealth of experience and knowledge in solar development to the team.”  – Ronan Kilduff, Managing Director, Elgin Energy

While there are many similarities in solar farm development in the UK and Australia, there are also many differences; the most notable one being project size. As Australia is significantly larger than the UK, much larger sites are available for solar farm development. Elgin Energy is working with a number of expert grid and planning consultants to assist us with the various nuances of developing in Australia.

Elgin Energy continues to develop in their home markets of the UK & Ireland and are exploring routes to market for their mature pipeline there. You can learn more about routes to market, specifically PPAs, across Europe in 2018 here.